I’ve been on a mission to re-do the “Mom-cave” this past week – I do have a few remaining small projects, but one of the things I came across while cleaning/organizing was a set of five of these sweet little saucers. Two of the five were displayed in my grandmother’s home for many decades – I’m not sure when she acquired them – and the remainder were in storage there. Two of them have some fairly noticeable flaws, and I’m now happily displaying three of them on my little restyled knick-knack shelf. 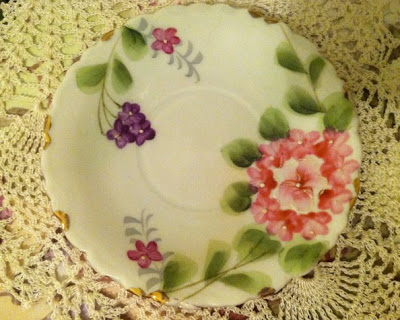 Based on the backstamp, I learned that they were a product of the Te-Oh China Company in Japan, and are examples of hand-painted Nippon ware produced between 1891-1921. 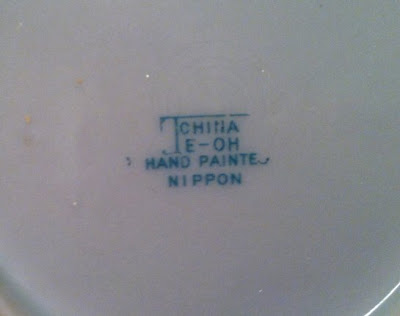 “Nippon” is (or was) the Japanese pronunciation of that country’s name. Beginning in 1891 the US’s McKinley Tariff Act required that all imported products bear the name of the country of origin. So, the word “Nippon” appeared on pieces imported from Japan beginning that year. Then, in 1921, the rules were amended to state that the name of the country of origin must be stated in English. Because the name Nippon was determined to be a Japanese word, its use was dis-allowed so imports after 1921 were marked “Japan” or “made in Japan.”

Along with the Te-Oh backstamp (which was a fairly common mark found on Nippon pieces), the translucence of these tiny plates is another indicator that they are delicate, authentic Nippon. 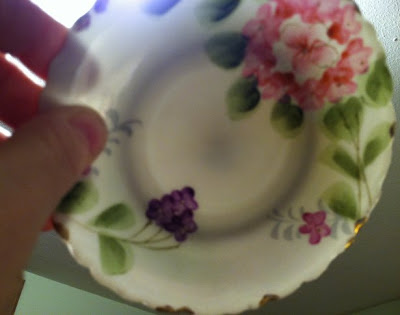 So is the use of gold edging and the raised dots and lines on parts of the design, although much real Nippon is actually more elaborate in design.

I am so happy to be displaying these delicate saucers – and am amazed that they could be anywhere from 92 to 122 years old!