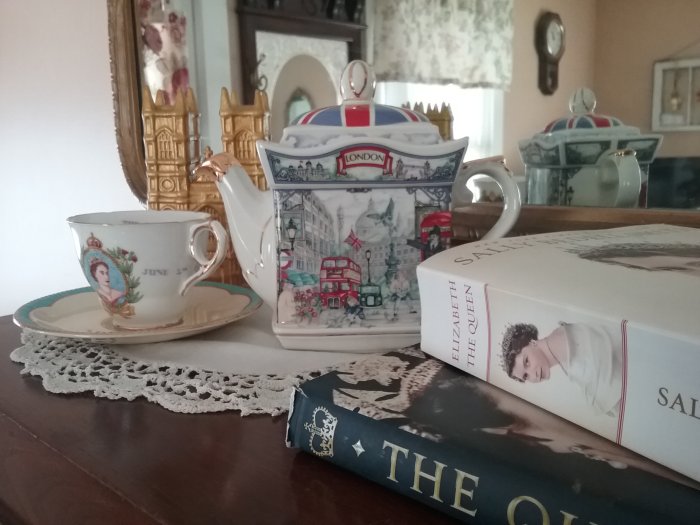 A small vignette atop my barrister bookcase, dedicated to Queen Elizabeth II of England.

I am fascinated by Queen Elizabeth II – in fact, I consider her to be the most remarkable woman in the world.

Here is a person whose destiny was sealed when she was just 10 years old. At that time, her uncle was King Edward VIII of England. King Edward was expected to marry a nice British girl, settle down, and raise a royal family full of heirs to the throne. Elizabeth was third in the line of succession to the throne, behind her own father, who would serve only if Edward and his future children did not. She was not expected to become Queen. 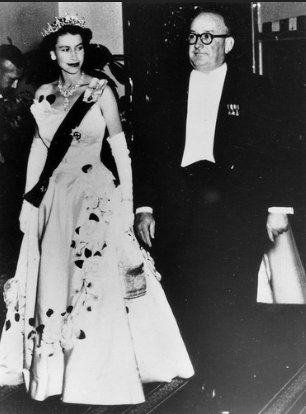 And then a rather unprecedented – and scandalous – thing happened: Her uncle gave up the title and position of King so he could marry an American divorcee – a marriage not allowed for the figurative head (and chief example-setter) of the Church of England. With his abdication, the title of King went to his brother – young Elizabeth’s father – who became King George VI. And because her father became the King, little Elizabeth was suddenly next in line to succeed him.

From that point on, her young life changed dramatically and she began learning about and training in earnest for her future role as the Queen of England and its realms. In 1947, at the age of 21, she gave a radio address as the heir-presumptive. In that speech, she offered this promise:

“I declare before you all that my whole life, whether it be long or short, shall be devoted to your service and the service of our great imperial family to which we all belong.”

And I think this is what fascinates me: at the age of 21, she seemed to understand the full gravity of what her future was to be, and she was already taking it very seriously, preparing for it, and acknowledging that serving as the Queen was to be her entire life.

In 1951, her father the King began experiencing declining health. In February of 1952, Elizabeth and her husband Philip traveled to the realms of Australia, New Zealand, and Kenya. On February 6, following an excursion in Kenya, Elizabeth was informed that her father had passed away. She became the Queen at the moment of his death, and returned immediately to England. She was 26 years old.

This year, February 6 marks the 67th year of Elizabeth’s reign. She is the longest serving monarch in British history, having surpassed the record set by her great-great-grandmother, Queen Victoria. She is also the longest serving current head of state in the world.

Elizabeth’s life has indeed been long – she is presently 93 years old and continues to work daily to fulfill the promise she made to her people so long ago. She has endured decades of change, tumult, peace, prosperity, hardship, war, and much more, both personally and as Queen. And always – always – on the world stage, under the glaring spotlight of a sometimes hostile press.

This is why I admire her so much. She pledged at age 21 to devote her entire existence to the service of her people, and she followed through. Her loyalty to her people, to her family, and to the institution of the  monarchy itself has simply been unflappable for 67 years. She is human, and therefore imperfect, but she has been a constant figure on the world stage for her entire adult life, and still going. She has lived entirely in the public eye, with the singular goal of preserving the British monarchy by uniting the many nations under its leadership.

I’ve read that Elizabeth herself does not choose to ‘celebrate’ her February 6 accession to the throne, because she feels that to do so would diminish the fact that it is the day of her father’s death. Instead she celebrates her coronation, which took place in June, 1953.

I do think it is worth noting that as of February 6, 2019, Elizabeth will have been the Queen of England for 67 years. A destiny she embraced, and continues to embrace, with dignity, grace, humor, earnestness, and sacrifice.

She is a world treasure.

This entry was posted in Thinky Thoughts. Bookmark the permalink.