Now that pink and gold Christmas has mostly passed (I still have my garlands up – lol), I’ve been freshening things up in the dollhouse with a bit of blue and white. It always seems like such a classic “new year” kind of color combination, don’t you think? 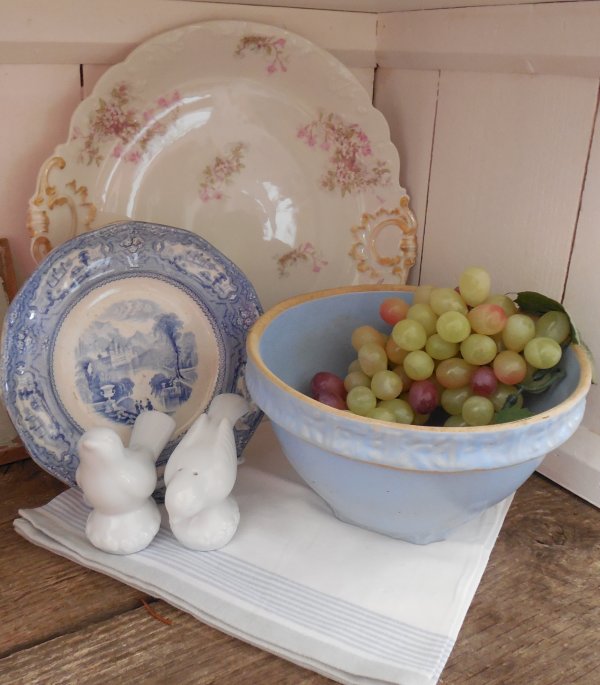 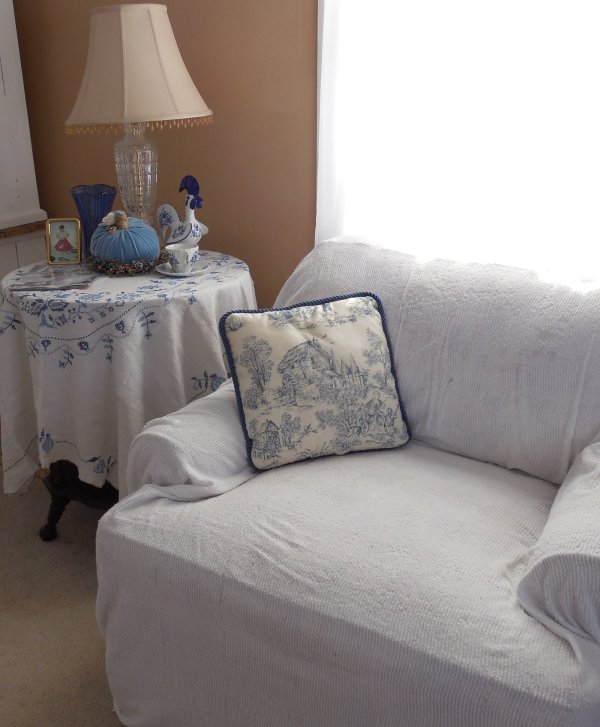 Unfortunately it has always seemed to me that when people talk about blue and white dinnerware, they usually trot out the trusty Blue Willow – which everyone seems to have had at one time or another (literally over the past 200 years!), and which is still being made today. Not to take away from this hugely popular pattern, but I’m not a big fan of chinoiserie so it’s just not really my taste. I much prefer more Western motifs, such as Johnson Brothers Devon Sprays, Coaching Scenes, and Old Britain Castles. (Although, JB was – and still is – one of many manufacturers to produce a version of Blue Willow…)

By far, though, my favorite blue and white pattern is Currier & Ives by the Royal China Company of Sebring, Ohio. So my blue-and-white tablescape features this friendly, casual pattern, featuring images from the prints of the illustrating/publishing duo of Nathaniel Currier and James Merritt Ives, who published lithographic prints from 1834-1907. 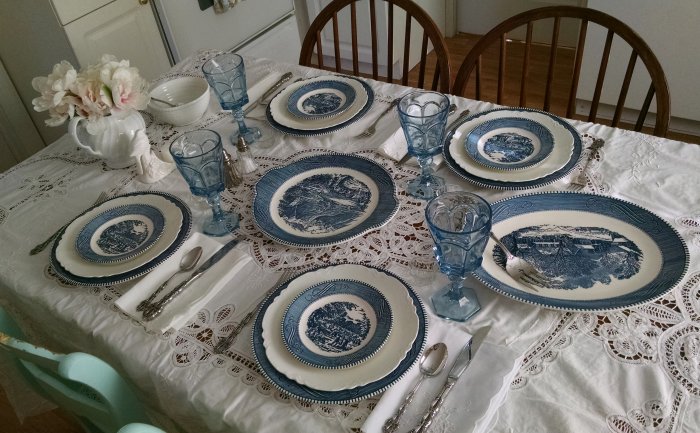 It’s no exaggeration to say this is the pattern that got me started collecting dishes – I acquired service for twelve from my grandmother Verdie, who gifted it to me back in the early 1990’s. It was the set she had for several decades… and we used it for birthdays, holidays, and Sunday dinners the whole time I was growing up. 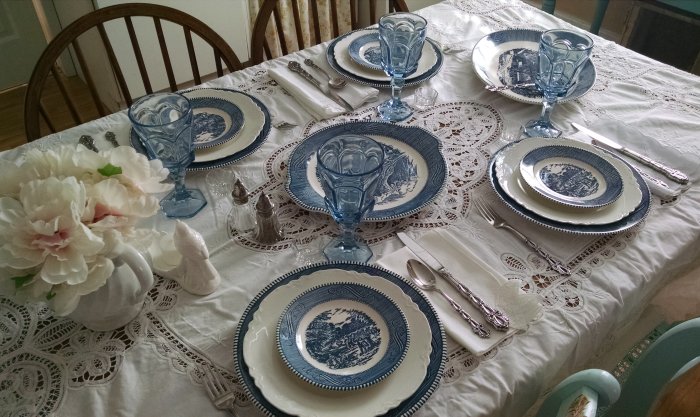 The Royal China Co. pattern was produced beginning in about 1949, and in addition to other distribution methods was given away as premiums in grocery stores. This is how Verdie built her set, piece by piece over time. 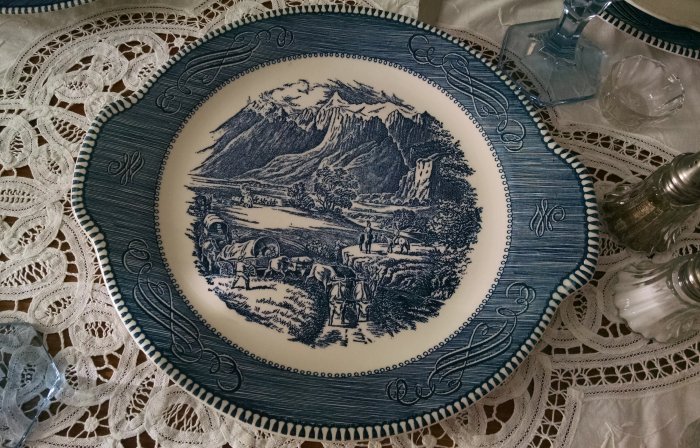 I’ve now had these dishes for almost 30 years. They have survived two whole-house floods, but I no longer have the entire service for 12. I down-sized my collection in 2008 after the second flood, keeping only the pieces I knew I would use: dinner plates, bread/dessert plates, and serving platters. (I’ve never regretted down-sizing in general, but I am maybe a teensy bit sorry I didn’t keep the berry bowls.) 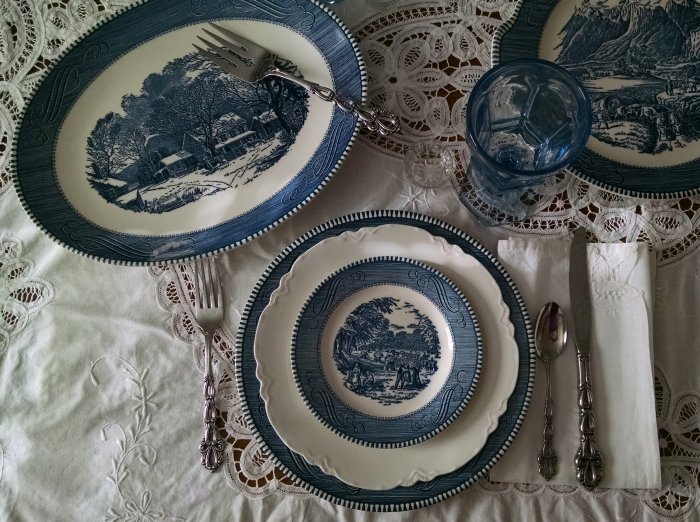 Although this table setting is far from being a duplicate of a typical table at Verdie’s house, it nonetheless brings back to my memory all those tables and the warm, wonderful family events that took place in her home. 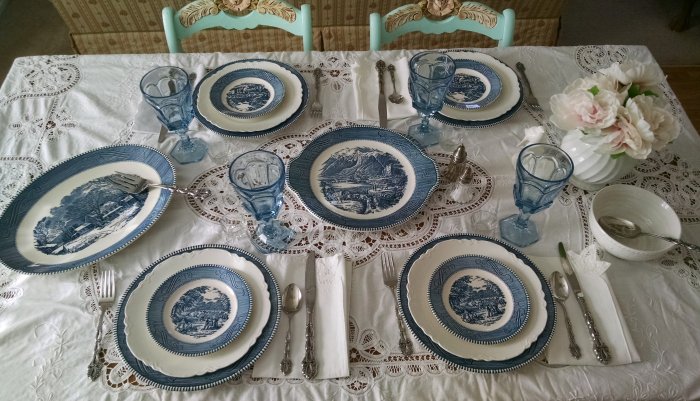 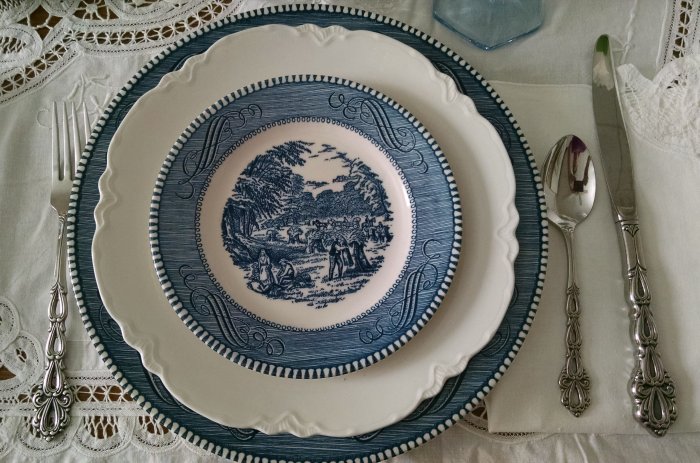 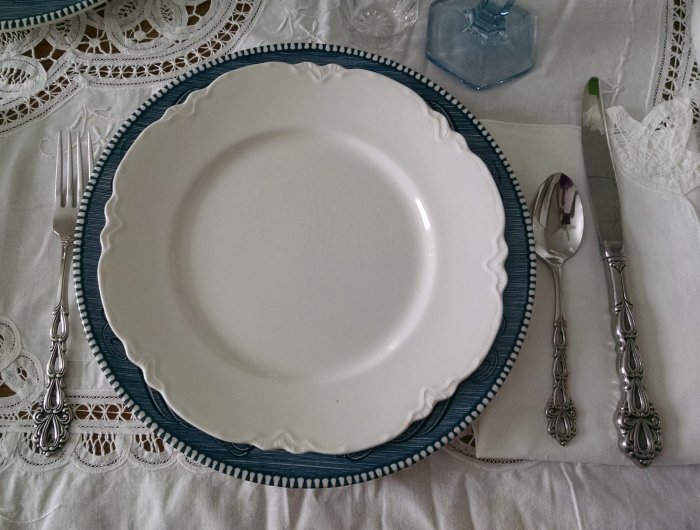 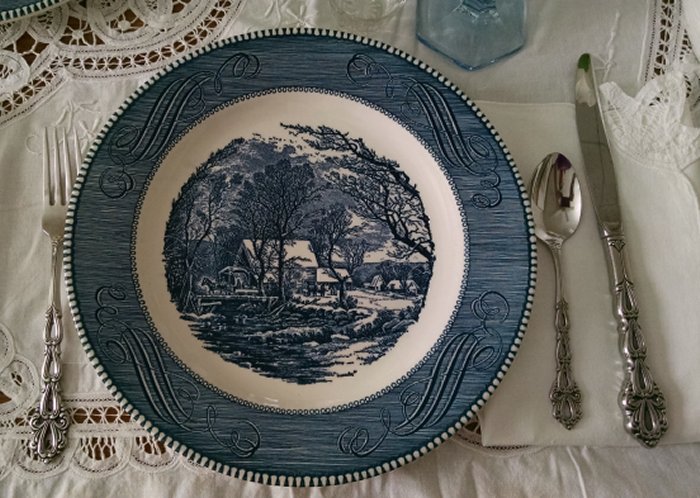 Flatware is my treasured Oneida Chandelier, which Verdie also gave to me. It belonged to her sister, my great-Aunt Hazel… in whose home we also enjoyed dozens of family gatherings. 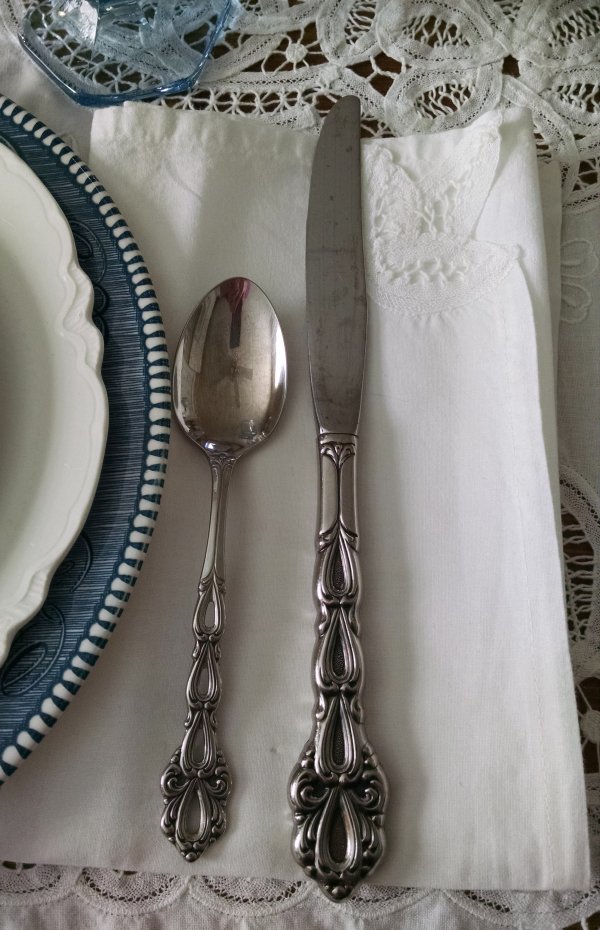 The pretty cutwork tablecloth and napkins are my own thrift-store and eBay finds from the past year. 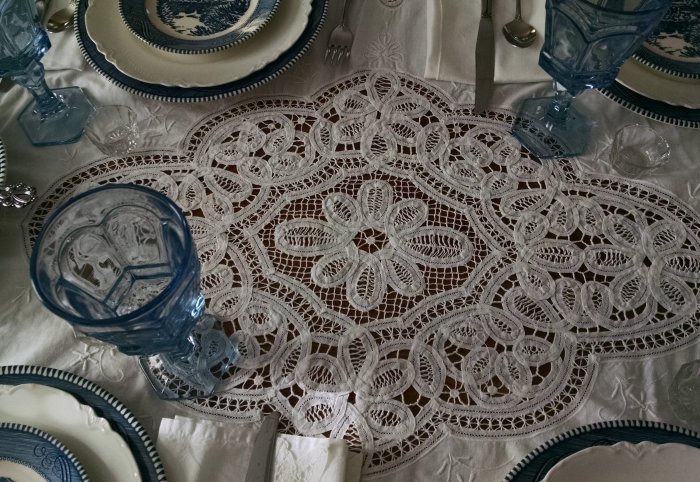 The blue Fostoria drinkware is perfect with the CI dinnerware, and is also a thrift-store find. 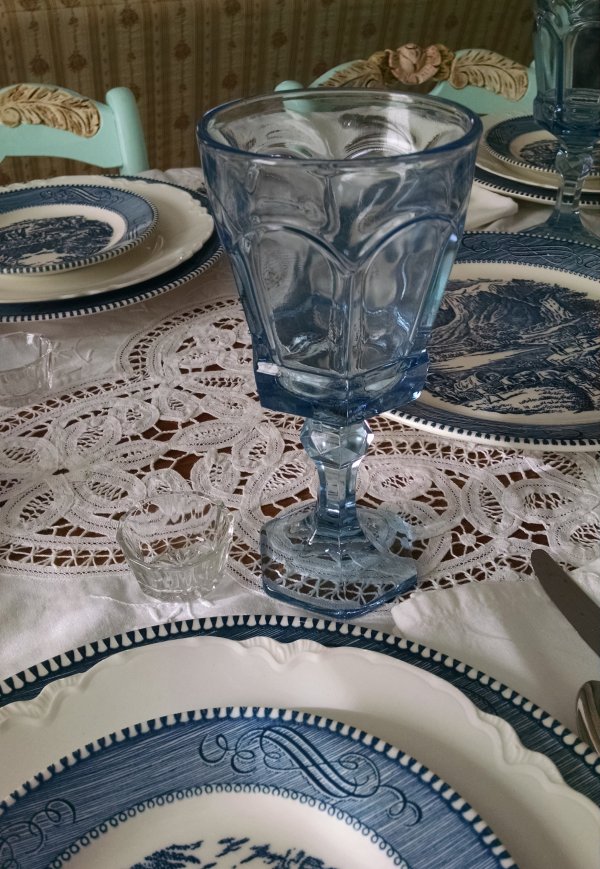 I just love the details in these stacked edges, and the crisp color combination. 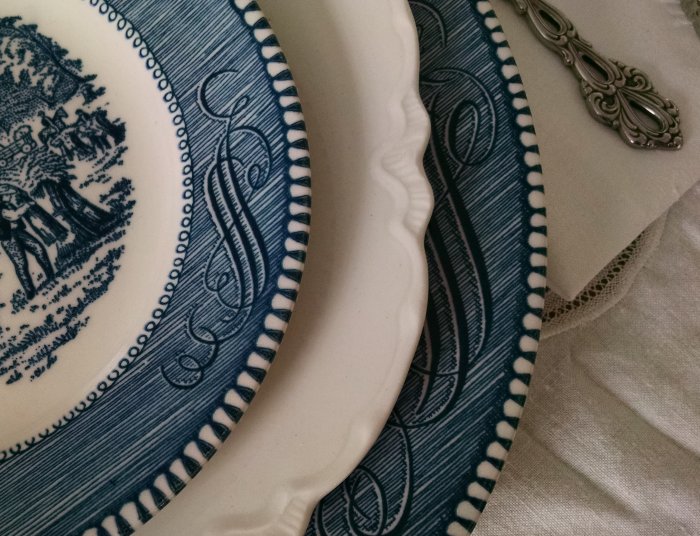 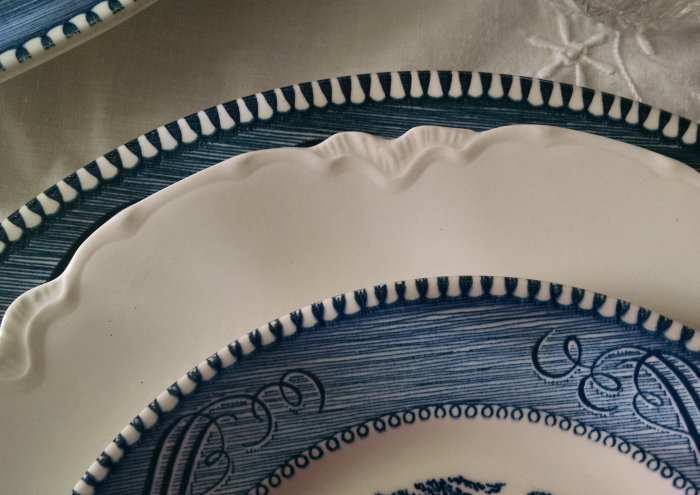 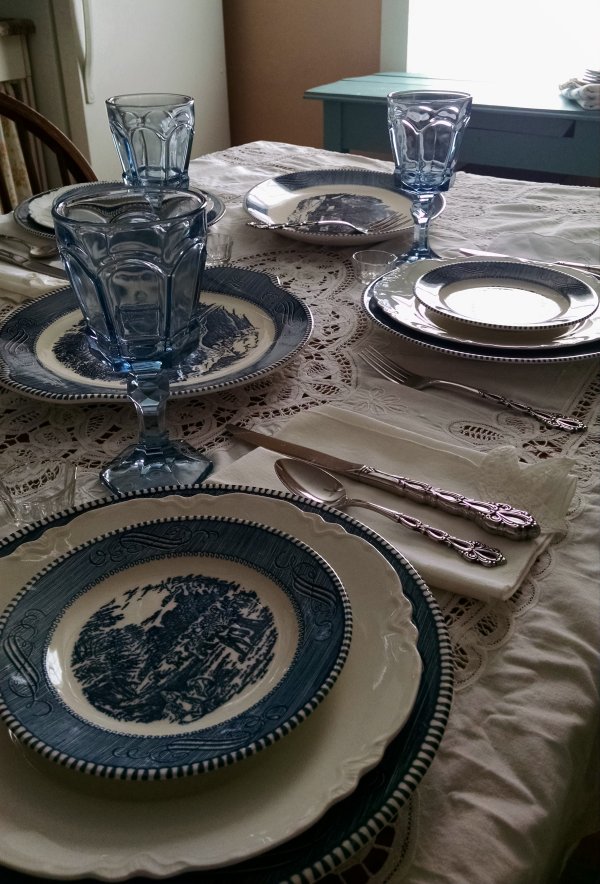 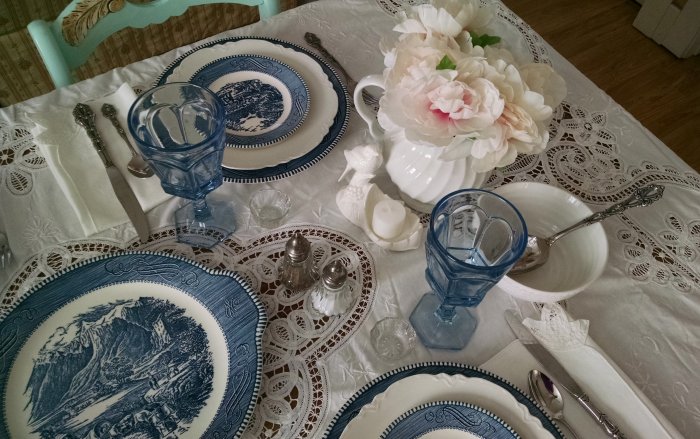 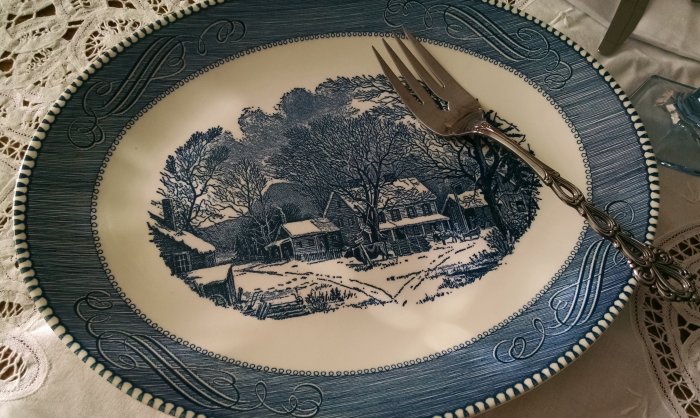 and the unique tab-handled version. 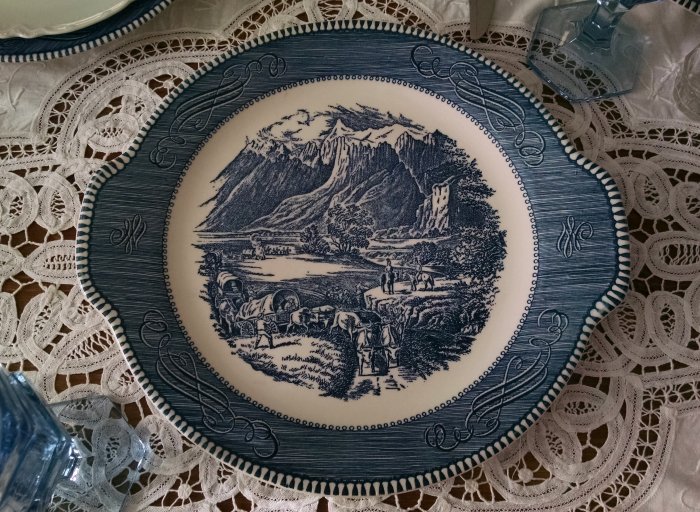 Other serving pieces are these simple white basket-weave bowls, a thrift-store find. We’ll use these for the mashed potatoes and for Aunt Hazel’s favorite canned vegetable, peas and carrots. She’d bring out a bowl full, set it on the table, and say, “Here are the peas and carrots – I want you to eat every carrot and pea in the dish.” (Aunt Hazel also taught us the “Beans, beans the musical fruit” song.) 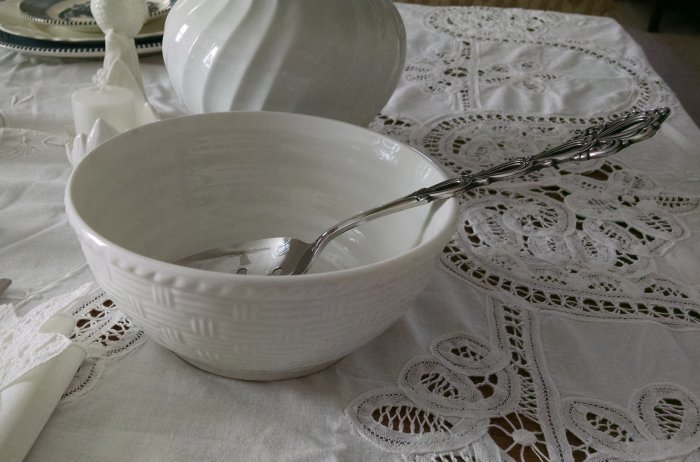 Now Verdie and Hazel never – to my memory – used a floral centerpiece… it was always the platter, brimming with turkey, roast chicken, or even zesty little mini-meatloaves they referred to as pigs-in-a-blanket… although there were always a few for us kids without the blanket, which was cabbage – yuck!

But I do love pretty flowers on the table, even if they are silk and not center-stage. 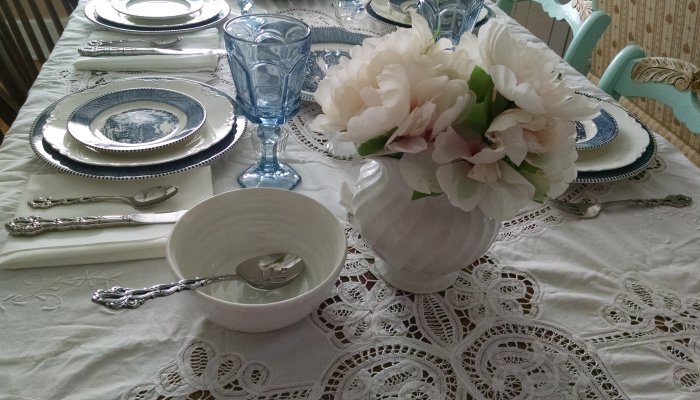 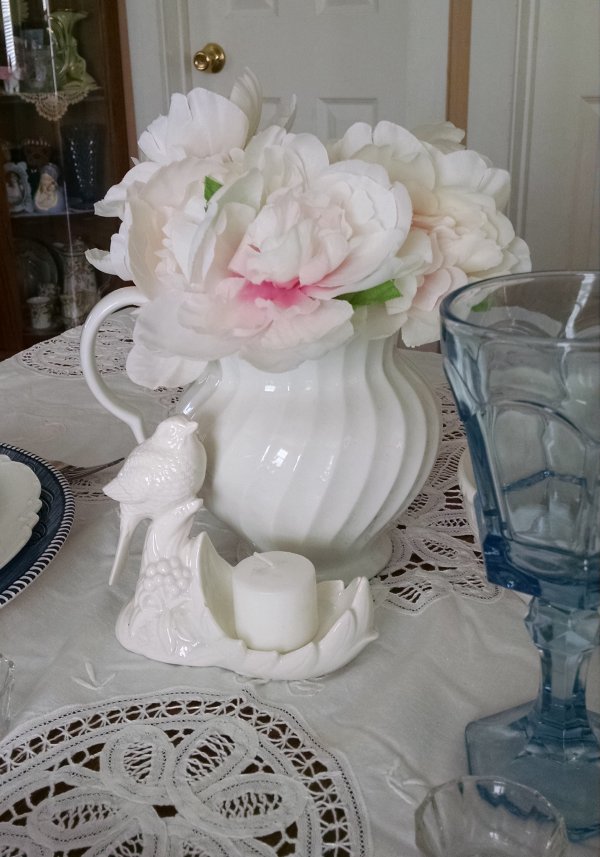 One thing they did use, though, was salt cellars – also called open salts. And do you know what we used them for? Radishes! Despite whatever other vegetable was being served, there were always thinly-sliced radishes in a bowl, and we’d dip them in the open salt. I love them to this day! 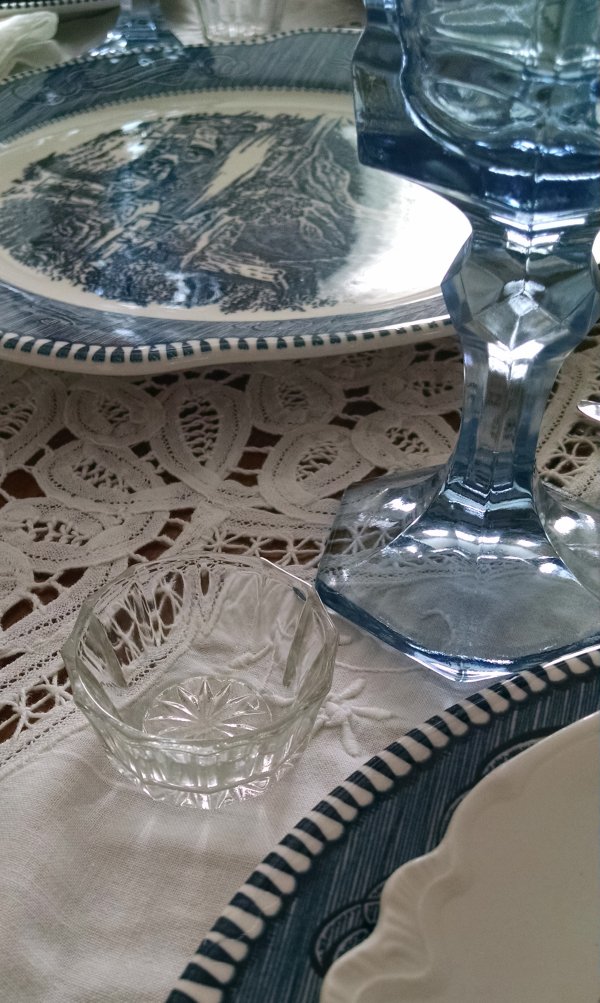 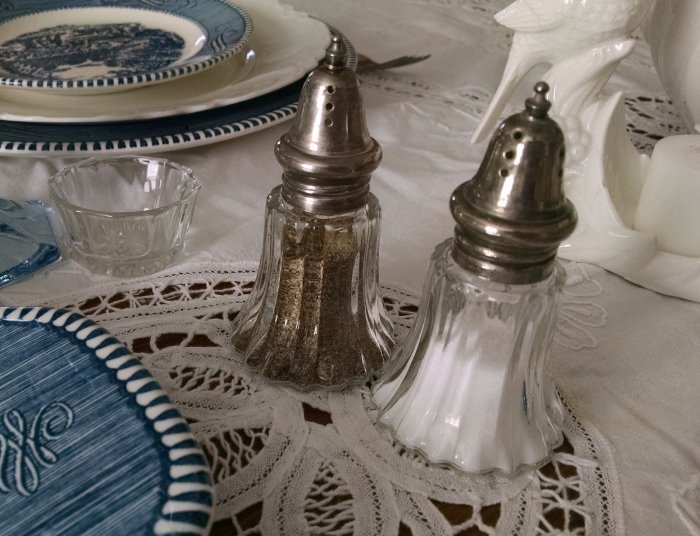 A few more views around the table… 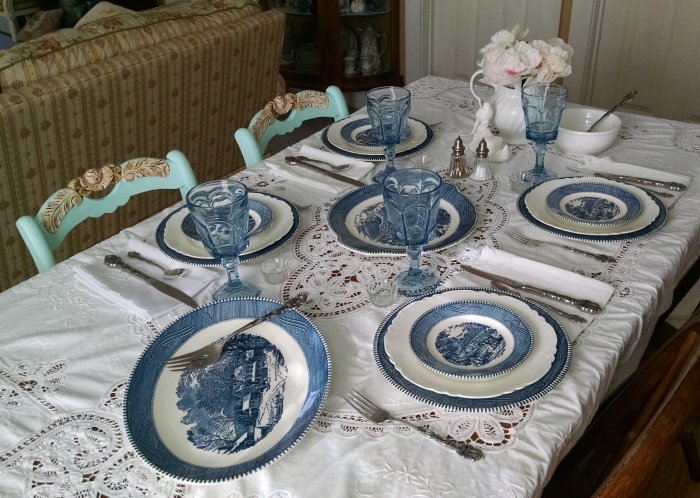 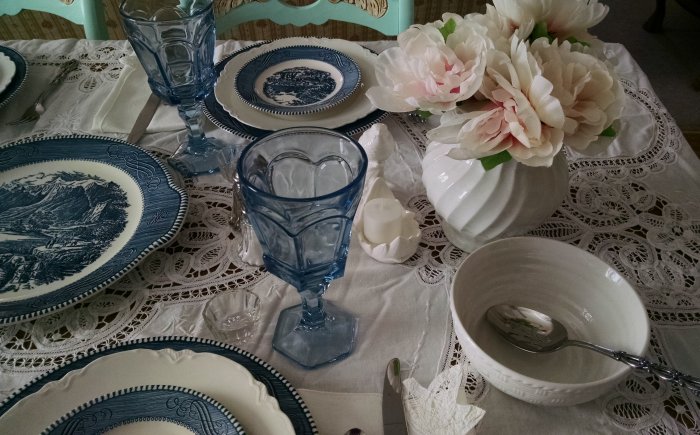 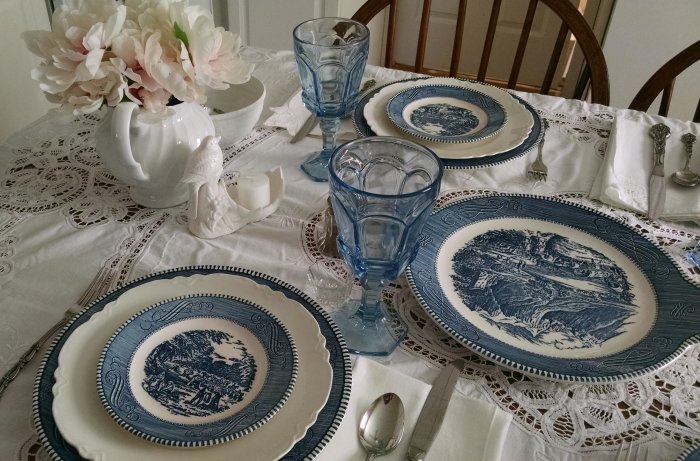 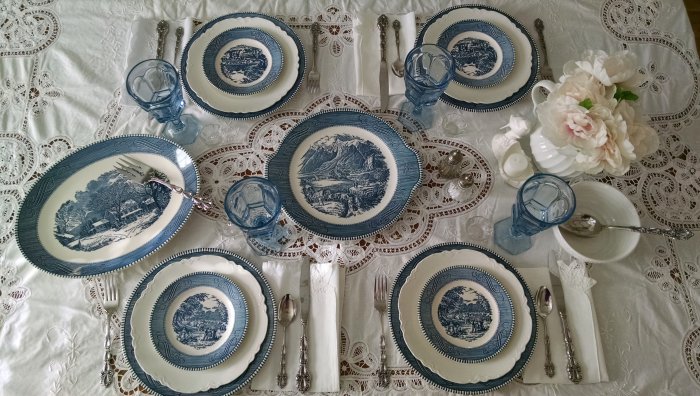 Everything hand-washed and ready to be put away… no automatic dishwasher at Grandma’s house! 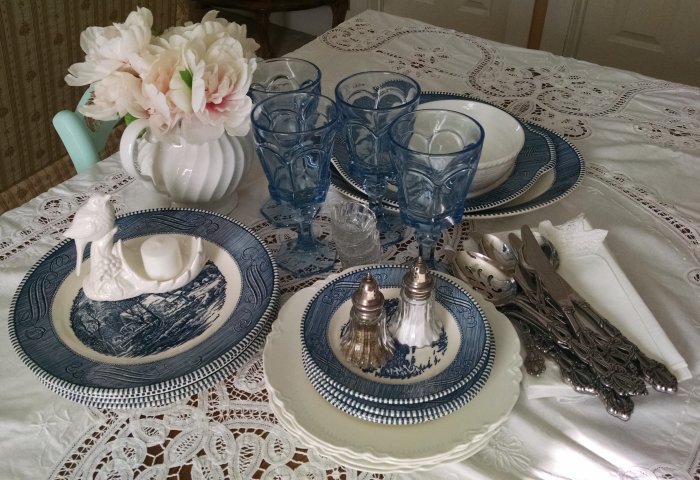 … and time to go sit in the living room to play some cribbage, or Yahtzee, or practice on the sewing cards while the women chat and the men take naps!

Of course, I’m sharing my blue and white table for Tablescape Thursday on Susan’s lovely blog, Between Naps on the Porch, as well as Feathered Nest Friday at the amazing French Country Cottage blog.

Here is a pinnable image in case you’d like to save this table for future ideas! 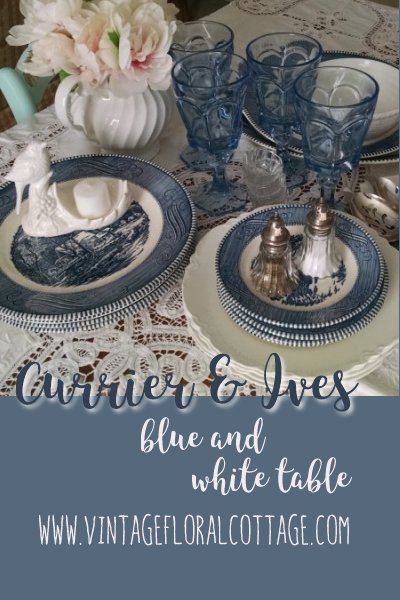 And finally, a funny side-story about Currier & Ives. Do you know the ice cream company, Schwan’s? In the mid-90’s after I was married, we had a “Schwan man” who used to come around and sell us a variety of their frozen products. Every year at Christmas, Schwan’s came out with a large tin of French Vanilla ice cream – the only time of year they sold that flavor. And the tin was always a different color, with a different Currier & Ives print on the lid. I collected those tins for several years, and one year while chatting with the Schwan man, he expressed surprise at how popular the tins were, year after year. I asked him if he knew who Currier & Ives were – I guess I just wanted to make sure he knew the history of these long-beloved American designs dating back to the Victorian era. I’ll never forget his reply: “Not really, just a couple of guys who work for Schwann’s, I think.” Oh. My. Goodness.

This entry was posted in Tablescapes. Bookmark the permalink.