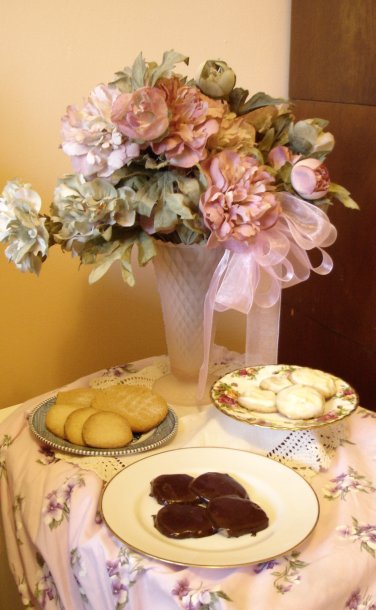 Awhile back I was enjoying a tin of plain old “butter cookies” and wondered if they were easy to make. I did a little searching, and quickly came up with a recipe for sablé.

Sablé is a very basic recipe that can be amended in innumerable ways, but at its core it’s essentially a butter cookie with a very crumbly, “sandy” texture. (The word “sandy” in cookies refers to the degree to which they crumble in your mouth – if you do sablé right, when you press one against the roof of your mouth, it practically dissolves in fine-crumbed perfection.)

The recipe I have is based on proportion rather than measurement. For simplicity’s sake, I’ve decided that “one part” equals a half-cup. So, “two parts butter” is one cup of butter, “one part sugar” is a half-cup of sugar, and “four parts flour” is two cups of flour. This makes it easy to halve the recipe for a smaller batch: half-cup butter, quarter-cup sugar, 1 cup flour. For salt, a pinch is still a pinch. (And I always seem to forget the salt!)

Having made this recipe several times, I’ve been wanting to try some variations. Certainly you could mix in some cinnamon or nuts, but “dipped in chocolate” always seemed like a good idea too. And something lemony. So today I made a small test-batch, divided it into thirds, and then experimented with the lemon and chocolate variations.

For the lemon cookies, I added a couple teaspoons of lemon zest to one third of the dough and then made up a small batch of lemon cream-cheese frosting (recipe here – I quartered this recipe and still had some left over). Once my cookies were baked and cooled, I simply frosted them and let the frosting firm up a little.

For the chocolate version, I made up some “sort-of ganache” (recipe here – I quartered this recipe as well, but again only because I was making a test-batch). I spread some like frosting, and also tried drizzling it over some of the cookies. It does firm up, making a glossy chocolate coating.

Both of these – and also the plain sablé – are superbly wonderful. They would be lovely accompaniments with lemonade, coffee or tea.

Here are the plain sablé cookies, along with a couple peanut butter cookies just for my hubby: 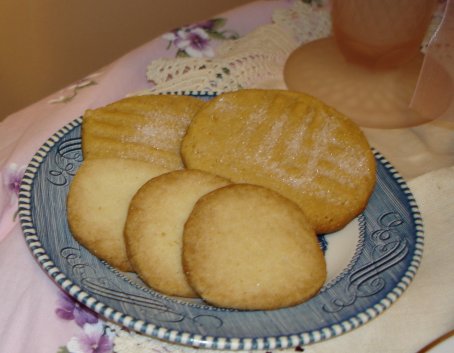 Next we have the lemon-frosted – I also put lemon zest in the cookie dough. These were my favorites! 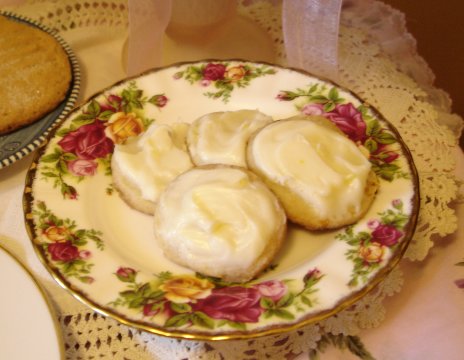 And finally, the “sort-of ganache”-covered Sablé – the ones that I merely frosted with the ganache were very good; the coated ones were a bit over-powered by the ganache. Probably chocolate “almond bark” would work as well for a milk-chocolate coating. 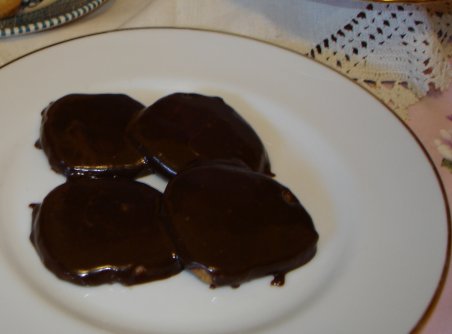 Combine butter, sugar, and pinch of salt in large bowl; add flour a little at a time, blending completely. When well-blended, form dough into a log about 1-1/2 inches in diameter. Wrap in plastic wrap, and chill in refrigerator for at least 30 minutes.

This entry was posted in Recipes. Bookmark the permalink.