Here in Iowa we’re fortunate to have several eagle nest cams in place. This rather hilarious image is from the nest cam in Alcoa, Iowa.

All across America it seems I am hearing about the resurgence of the Bald Eagle population. Which is great, because not only are bald eagles stunning in their beauty and fascinating in their habits… they are also, of course, a symbol of our nation and its freedom. (It would be pretty pathetic to have an extinct creature as our national symbol. All I can say is it’s a damn good thing our founding fathers did not choose the equally noble – but less adaptable – pocket gopher to serve in this important role.)

I mention the bald eagle here as a bit of preamble because there is a rather amazing eagles’ nest just a few blocks from our house, and because this post is indeed about Animals I Don’t See Often.

However, it is not about the Bald Eagle. Instead, it’s about sciurus carolinensis, the black squirrel.

Have you ever seen a black squirrel? I’m 56 years old and I just saw my first one in 2015. That’s right, I went more than half a century without ever seeing one, for the probable reason that they are a rare-ish genetic mutation found in gray and fox squirrels, and I’ve just never lived near any genetically mutated squirrels.

But, now that I live in Historic Valley Junction, I am fortunate indeed because there is a pair of delightfully mutated squirrels that live in the park just down the street. 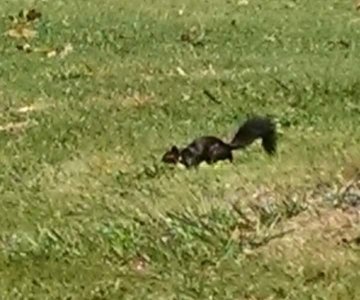 The first time I saw one I thought it was a black cat. But it darted out in front of my car and as I slammed on my brakes I realized it was really a squirrel, in a color I had never seen in fifty-plus years of life!

I was very excited and over the next few weeks I stopped at the park often and tried to snap some pictures. Apparently black squirrels are no more sociable than the non-mutated variety. And, I am not really a patient nature photographer, so all I have are some far-away/blurry shots, sort of like that famous picture of the Loch Ness monster.

Last summer and Fall I worried constantly about “my” black squirrels getting hit by cars. Then as winter approached I worried about them freezing to death. I think I saw them maybe twice, all Winter long.

As the weather warmed in March and April, I would scan the park with hopeful eyes each time I drove by, but with no sighting in over eight weeks, I had resigned myself to the sad realization that they likely did not survive the winter.

Until… !! Just a few weeks ago, I literally squealed with delight upon seeing one of the pair scampering through the park, his bushy tail held high and flicking about, and his jet black body distinct against the bright green Spring grass. 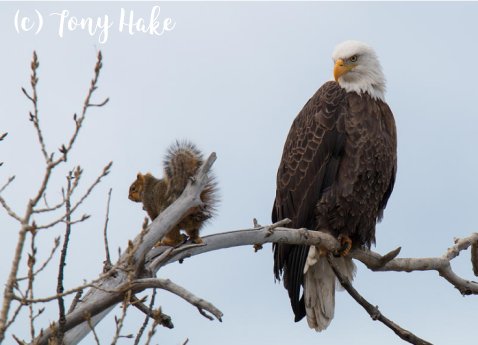 Image of a bald eagle and squirrel by Tony Hake. Click here to purchase the image in various formats! https://fineartamerica.com/featured/squirrel-gets-perilously-close-to-a-bald-eagle-tony-hake.html

I am so happy to see this unique little creature back in the neighborhood, encouraged that they survived the winter months and hoping against hope that they stay in the grass and out of the street.

And also that the Bald Eagles who live at the other end of the street do not have genetically mutated squirrel on the lunch menu.

Update, April 10, 2018: Just saw one of the black squirrels for the first time today – once again it’s been a really long time since I’ve seen him. So happy he’s still around!

Update, July 2018: I’ve now seen BOTH black squirrels together in the park, so I’m happy to report they are both still with us!

If you enjoyed this post, make sure you subscribe to my RSS feed!
Please share on your favorite sites!
This entry was posted in Yard & Garden. Bookmark the permalink.